And then from the dark rose a small creature, and it did have a belly.  And unto its belly it was given some legs with sucery things on.  From it came a head and on that head came twisty things, yea, which also came out of its bum, then some more, from its back.  And it was dark and devilish.  Thus the creature was finished, so its creator stood and said “behold!  The Collfacecaterpillar!”  And it was good.

One thought on “CFC” 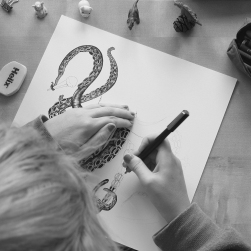